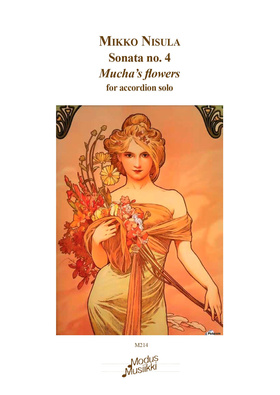 Accordion Sonata no.4 "Mucha's flowers", op.40, was commissioned by accordionist Janne Valkeajoki and composed at the turn of the year 2017-18. The actual inspiration came from the structural connections between music and the visual arts, which has fascinated me for a long time. I began to imagine, how might sound the wide arched plant ornaments of paintings by Alphonse Mucha (1860-1939).

Mikko Nisula (b. 1974) studied musicology at Helsinki University and composition at Saint-Petersburg Conservatory with professor Boris Tischenko. Later he completed his studies in a master-class with the Belgian composer Philippe Boesmans. Among his central works are the opera Tähtisilmä (Starry-eyed girl) (2010-17), Piano Concerto (2018), Sinfonia concertante (2009), a cantata Myrsky (The Storm) (2006) and 5 orchestral fantasies, of which the most well known is Vellamon neidot (Vellamo's Maidens) (2016). Worth of mentioning are also 3 chamber concertos, 5 song cycles with different instrumental combinations and 4 sonatas for accordion, which is published by Modus Musiikki Oy.