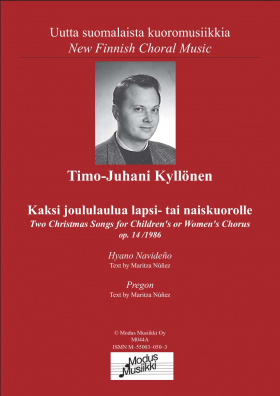 Two songs for a children´s choir op. 14 is composed in Helsinki 1986. They are based on poems from the first anthology The Pentagramas Ebrios of the Peruvian author and choral conductor, Maritza Núñez. When I was studying at the Tschaikovsky Conseratoire in Moscow I visited a couple of times in Peru After having graduated from Moscow and after having returned back to Finland it was self-evident for me to compose the Two Christmas Songs for a Children's Choir op. 14 on the basis of the same tradition as the poems were based on.