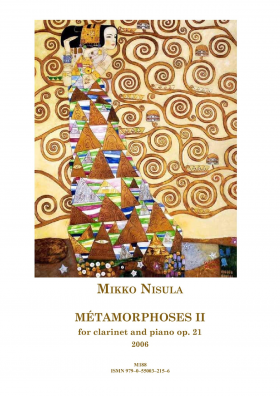 Métamorphoses II for clarinet and piano

My duo works Métamorphoses I–II (2003–2006) belong to the long line variations composed with the title Metamorphoses during the 20th century. These two pieces are also partly transformations of each other (Fr. métamorphose = transformation). Métamorphoses II, op.21, composed in 2006, begins with the cadenza-like diagoque between the clarinet and the piano, during which the central material of the work is introduced. After the introduction (bb. 1–13) five variations are heard, each of which can be characterized as follows: capriccio (Allegro energico, bb. 14–46); romanza (Andantino, bb. 47-59); scherzo (Allegro giusto, bb. 60–108); toccata (A tempo, subito drammatico, bb. 109–148); finale (Solenne, ma con moto, bb. 149–165). In other words, in this work there is a long series of capricious transformations, which lead from the fragmentary ideas of the introduction to the grandiose melody of the final section.

Métamorphoses II is dedicated to the clarinettist Lauri Sallinen, who also gave its first performance, together with the pianist Paavo-Pietari Maijala, during the Karelian White Nights Festival in Petrozavodsk, Russia, on 26 June 2006.