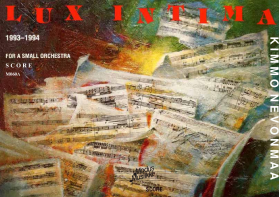 Lux intima (1993-94) for chamber orchestra by Kimmo Nevonmaa is the second in a series of three independent orchestral works that form a trilogy. The trilogy opens with Dolor nascens et effluens (1991-92) for strings, stringed instruments and percussion and will conclude with the saxophone concerto Heros serenatus that the composer is currently (1995) writing.

Nevonmaa's trilogy is very autobiographical in nature.In Dolor nascens et effluens, Nevonmaa sought to interpret feelings of extreme pain and suffering in music. Luxintima is of a completely different character, althoughthere are still echoes of the stabbing 'waves of pain'typical of the previous work. These waves do not dominate the work, though; the music seeks to transcend pain, transmuting it into a kind of silently glowing internal light that casts its conciliating brightness over the composition.Lux intima consists of three movements that arelinked without break. The last movement is an adaptation of an earlier chamber music work entitled Tumultuous(1992). The musical focus of Lux intima is in its middle movement (bars 70 to 149), dominated by soft and soothing string harmonies of six to nine parts containing many thirds. The opening movement (bars 1 to 69) is more energetic, in effect an extensive introduction. The third movement (bars 150 to 210), concluding in a virtuoso Presto, concludes the work as a symbol of the inextinguishable joy of existence to which the pain of life gives a profound, incisive significance.

Lux intima was premiered by the Finnish Radio Symphony Orchestra under Okko Kamu at the opening concert of the Helsinki Biennale on March 8, 1995.