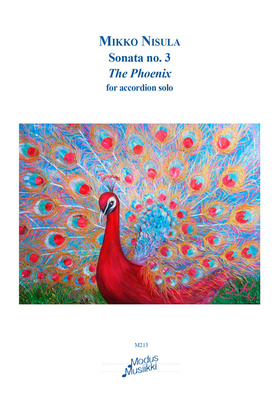 Mikko Nisula (b. 1974) studied musicology at Helsinki University and composition at Saint-Petersburg Conservatory with professor Boris Tischenko. Later he completed his studies in a master-class with the Belgian composer Philippe Boesmans. Among his central works are the opera Tähtisilmä (Starry-eyed girl) (2010–17), Piano Concerto (2018), Sinfonia concertante (2009), a cantata Myrsky (The Storm) (2006) and 5 orchestral fantasies, of which the most well known is Vellamon neidot (Vellamo's Maidens) (2016). Worth of mentioning are also 3 chamber concertos, 5 song cycles with different instrumental combinations and 4 sonatas for accordion, which is published by Modus Musiikki Oy.

Accordion Sonata no.3 ('The Phoenix'), op.31, was composed mainly during the summer 2013. It is written in free sonata form in one movement, in which the exposition (Allegro energico) begins with a cuckoo-like main theme. In addition to it, there are two other central themes in this piece. The first one of them has a pastoral character and the second one is singing and epic.Sonata No. 3 is dedicated to prof. Matti Rantanen.