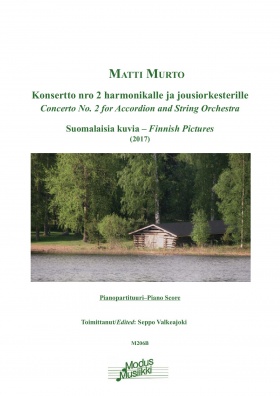 Concerto for Accordion and String Orchestra no. 2, Images of Finland was premiered on February 20th, 2017 in Mikaeli Concert Hall in Mikkeli, Finland, and soon after in Lappeenranta City Theatre on February 22nd, 2017. Jonna Autio and Ville Ryösö, students of the Lappeenranta Music Institute, performed as the soloists. Tuomas Rousi conducted the chamber orchestra assembled together from the students of Mikkeli and Lappeenranta Music Institutes. Both concerts were a part of the Finland´s centennial celebrations.